Valtra tractor production - How farm tractors are made The Suolahti assembly plant in Finland produces a new A, N or T Series Valtra tractor every 12 minutes. The plant operates six days a week with a single shift. In addition to the assembly plant, Suolahti is also home to the engineering centre, transmission plant and spare parts centre. Altogether around 950 employees work in Suolahti. Cab Cabs are supplied by Maaseudun Kone Oy, which is located approximately 200 kilometres from Suolahti. Each cab is delivered just in time according to each individual customer order, as are the engines, tyres and other major components. Just in time logistics mean that components are delivered to the assembly plant just when they are needed on the assembly line, which minimises stocks. Valtra is served by 230 suppliers, 60 percent of which are Finnish. Engine and transmission are coupled In the first stage of assembly, two mechanics couple the transmission that comes from the adjacent transmission plant to the engine, which is delivered from the AGCO Power engine plant in Linnavuori, Finland. The transmission enters the line from the left side and the engine from the right side. Transmissions are connected to the chassis of HiTech models during the transmission preassembly stage, while the front end, clutch components and SCR system are fitted to the engine during the engine preassembly stage. Front axle Front axles are fitted at the start of the assembly line. Customers can specify a standard front axle, a front axle with hydraulic suspension, or an Aires front axle with air suspension. Each tractor that is assembled on the line is tailor made according to the individual specifications of each customer, and A, N and T Series tractors are all assembled on the same line in random order. Not a single tractor is assembled without an order – either that of the end user or a dealer. Tyres Tyres are fitted conveniently using a crane. The tyres are first fitted to the rims during preassembly. The tyres are delivered from a warehouse 50 kilometres away only when the tractor in question has joined the assembly line, and they arrive for preassembly right before they are need on the line. Customers can specify Mitas, Trelleborg, Michelin, Nokian or Bridgestone field, row crop or forest tyres in metric or imperial sizes and with rib or block treads. Testing Each tractor is test-driven after assembly. Before then, each transmission, engine and cab is individually tested. Tractor must pass through four so-called quality gates along the assembly line. The test drive lasts for around 50 minutes, and between 500 and 800 individual areas are inspected depending on the tractor model and specifications. After the test drive, the tractor undergoes a visual inspection, the brakes are tested on rollers, and the forward-reverse shuttle and clutch are adjusted in a covered area outside the assembly plant. https://www.youtube.com/c/Automotivegarage 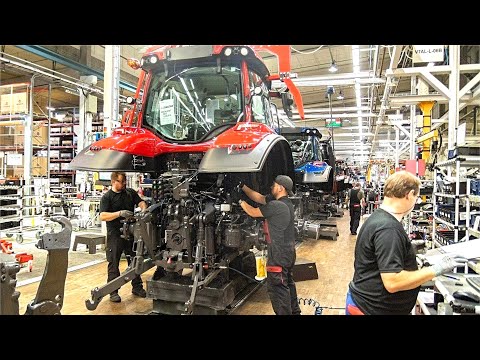 Going Fendting! Or so I thought